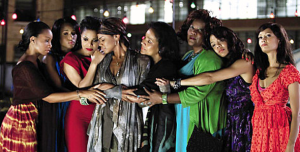 This weekend was the opening of Tyler Perry’s film adaptation of the critically acclaimed For Colored Girls Who Have Considered Suicide When the Rainbow Is Enuf by Ntozake Shange. There was much buzz around Perry, a Black male, taking on such a resounding chorus for Black women all over the world. We wondered, “is he capable?” “is he going to feature Madea as one of the ‘colors?'” “who the hell told him that he could tell our story?”

Even I was on the you-are-not-the-right-one-to-tell-this-story bandwagon early on. Guilty as charged. I always thought that Tyler Perry left his viewers hanging with unresolved plot lines  and rushed character development and, for someone who has gone from slap-stick comedy in his stage plays to million dollar movies, I just didn’t correlate the Tyler Perry I see in my head (who looks and talks like Madea) to such a important piece of text like For Colored Girls.

Many of my friends and college classmates  gave varying degrees of opinion. From the “my-feminism-will-not-allow-me-to-agree-with-anything-a-man-does-even-if-it-is-good-makes-sense-and-I-can-relate-to-it” to a resounding cyber-applause for Tyler Perry, the movie, and the realness of the characters.

I took all of these thoughts, feelings, and opinions into the theater tonight and realized that this movie isn’t about Tyler Perry and his previous cinematic efforts. It’s much, much more.

It’s about the bravery of the women who portrayed a differenct facet of Black womaness, many times, a side of our Black womaness that we want to keep hidden in the shadows and foggy mist of our imaginations.

We don’t want people to know that we are broken, abused, hurt, forced on our knees to serve as the trodden path of those who “rule” over us.

We don’t want people to know that we mistakenly love the wrong ones and let go of the right ones.

We don’t want people to know that the facade we put on as Super Black Woman (fly your cape!) is many times just that: a fake.

We don’t want people to know that beyond our academia and righteousness that we genuinely just want to love as hard as we can, without letting go, with out apologies.

We don’t want people to know that sometimes we make mistakes and our most valuable selves, including our children, suffer at the hands of our refusal to let go of love.

We don’t want people to know that those same men who do not love us are worthy of forgiveness and we spend every waking hour trying to help them receive that same forgiveness.

We don’t want people to know that despite the front we put on, we want to be fucked. Yes, fucked. Without rhyme or reason.

We don’t want people to know that we have the desire to be fucked because our daddy’s fucked us first.

We don’t want people to know that there are tons of pieces that have been left behind, scattered across the Diaspora and without them we’re a mess.

But with them, we are resilient, brilliant, and worthy of every thing we secretly desire when no one is watching.

We are everything Shange and Perry expressed in that film. No matter how far you try to remove yourself from it, that’s you. That’s me.

We are. And that’s okay.

Who are we to shy away and be afraid of our pain? Our joy? Our failures? Our triumphs?

Who are we to not reach the end of our rainbow?

6 thoughts on “For Colored Girls Who Are Okay With Being Colored.”