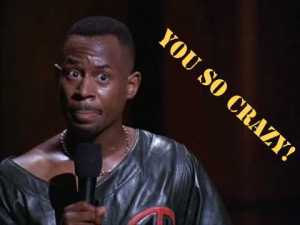 While talking to my sister-in-law the other day, I came to the conclusion that you must absolutely, positively, be crazy to do what God tells us to do.

Just think about it: the people who achieved the greatest exploits for God had to be c r a z y.

Abraham took his son on top of a mountain to slice his neck because God told him to.

Moses led millions of Israelites through the red sea with a stick because God told him to.

Jesus went into the wilderness for 40 days and 40 nights with no food or drink because God told him to.

There is no way that the natural mind could understand and obey those types of commands without being crazy.

In our society, you see people achieving great exploits because they are crazy. They’re crazy enough to believe that whatever dream or passion they have, they’ll do any thing to follow it and achieve it.

During the 1970’s, people thought this nerdy white kid named Bill Gates was crazy to think he could create a computer program that would make the use of computers easier.

I’m sure the people of Kosciusko, Mississippi thought Oprah was crazy when they heard that their little Black girl left the home of her father in Tennessee, moved to Chicago and pursued a career in journalism.

When God puts a passion in us, we must be crazy enough to pursue it. We must be willing to do whatever it takes to get to our goal, even if that means people will think we’re crazy.

Sometimes we see people “get crazy” and leave their jobs in pursuit of something “God told them to do.”

One thing we should know for sure, if God told you to do it, you will have success, you will produce fruit.

If you did it on a whim, because you had an emotional fit, or because Ray-Ray thought you sung well enough you could quit your job and move to Hollywood, then expect for you to hit some hard times trying to reposition yourself back where you belonged in the first place.

We have to get out of our religious, safe mindsets in order to do the things God is calling us to do. We must be radical in our actions and move when He tells us to move exactly how He tells us to move, even if it doesn’t make sense. Don’t let fear of ridicule, lack of provision, or anything else keep you from doing what God tells you to do. If you do, you could spend 40 years to accomplish an 11 day journey.

In Numbers 13, we learn about when God told Moses to send surveyors to the promise land to find out who dwelled there, what kind of food and resources were there, and to bring back a sample of what type of fruit was growing there. God told Moses that they were to take that land for it belonged to them.

So they sent over some spies plus Caleb and Joshua and here’s what they reported:

A land of milk and honey… fresh waters, lush green grass, and grapes SO big, it took TWO men to carry it on the vine. TWO.

But (here comes the fear) the land was overrun by giants. Big, 12 feet tall giants. The spies cried “oh the land is great, it’s so luscious, but there are giants there and there’s no way we can defeat a giant!(Numbers 13:28-29)

But Caleb reminded them of what God told them:

Then Caleb silenced the people before Moses and said, “We should go up and take possession of the land, for we can certainly do it. (Numbers 13:30)

However, the fear from the spies had already taken root in the people of Israel. While what God told them to do was C R A Z Y (how can these people the size of grasshoppers defeat GIANTS?), because GOD told them to do it, they would be successful. Unfortunately, fear penetrated the camp and they wondered around in the wilderness for 40 years.

(Just fyi: the men who instilled the fear in the people of Israel were struck dead with the plague. Just so you know. Don’t believe me? Read Numbers 14:36-37)

What has God told you to do that you haven’t done because it seems too crazy? How many times has He confirmed His word in you and you still haven’t made a move? Who is in your life that keeps speaking against what God as told you to do?

We didn’t know that being crazy was a requirement to walk this walk successfully, but if you’re willing to shed the social and religious stigmas to stay on hot pursuit of God’s purpose for your life, you can rest assured that being called crazy will be their problem, not yours.

3 thoughts on “You Got’tah Be Crazy!”