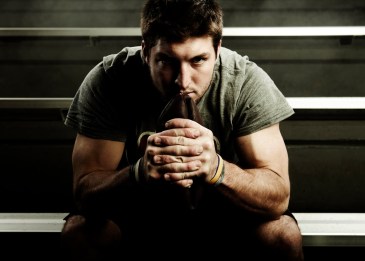 While I’ve always been an avid NFL fan, I never thought that the sport would call for two different blog posts about one particular player and his faith. One discussion after another, Tim Tebow and his miraculous feats on the football field have stirred up another week’s worth of water cooler discussion, sending the media into a frenzy over Tebow, his football skills, and his faith.

This week, many “pundits” noted that Tebow is not the first sports figure to represent his faith publicly through some kind of prayer, hand gesture, in-zone celebration, or quiet reflection with bibles all around in the locker room. Pittsburgh Steelers star safety Troy Polamalu is known around the league as someone who prays during plays.  (Is that considered an audible?) Even Tebow’s own teammate Brian Dawkins is recognized for his outspokenness about his faith. Everyone seems to “thank God” for his or her accomplishments – it’s seemingly the “thing” to do. Even if your works don’t glorify Him, (I read that a porn star thanked God at an award ceremony) people have been giving God the credit for all kinds of things (good and bad) for a very long time.

We can all agree that Tim Tebow is NOT the first athlete or person to give God glory for His wonderful exploits. Right? Right.

So that leads me to this question: Why Tebow and why now?

Why, after so many other players before him who have openly professed Jesus Christ as their Lord and Savior, not gotten the same attention for their expressions of faith?

For everything there is a season, a time for every activity under heaven. — Ecclesiastes 3:1

Throughout history, there has always been one person out of many that rose up to do great things in our society. Even if there was someone in close proximity doing the same thing, there was seemingly only room for one person during a particular “season”  to have a greater impact than the rest.  Martin Luther King, Jr. was one among many men and women who were fighting the good fight and standing up for justice for all people. The names of the Civil Rights greats are long and plenty, but it was Martin who was called out, set apart from his peers to change the course of history.

Consider Paul from the bible that was formerly known as Saul, the Christian killer. In his day, there were MANY people killing and persecuting Christians — he wasn’t the only one! But God called for Saul to encounter Jesus on the road to Damascus to change his life for the good. He was one out of many who were all doing the same thing, but was chosen to do more than the rest. Because of Paul’s calling, he revolutionized what it mean to be a Christian and established some of the early churches that took the gospel around the world.

Now, in no way will we ever try to compare Tebow’s skills with a pigskin to that of Martin Luther King, Jr. and the apostle Paul, but we can see that there are some similarities to those people who were picked out, chosen, set apart to be the one to bring glory to what God is doing in the earth.

Why Tebow, why now? Because God is calling for believers, the ones bold enough to stand when the world tells you to sit down and shut up. Everyone’s purpose isn’t the same — we aren’t all called to be main attraction super heroes for Christ. Some of us will play our positions behind the curtain. Some of us will have small roles on stage. And some of us, like Tebow, will have to swing from the rafters about how great our God is. It is not for our own glorious gain, but to win souls to Christ. Those who live for Christ are charged with the mission to bring others into the fold. Whether we do that in the quiet spaces of our home or on the world stage, our mission is all the same.

For just as the body is a unity and yet has many parts, and all the parts, though many, form [only] one body, so it is with Christ (the Messiah, the Anointed One). — 1 Corinthians 12:12

We can discuss for hours whether Tebow is skilled enough on his own merit to take the Denver Broncos to the Super Bowl (without some divine intervention, of course). However, what we can take away from his successes now is that God has elevated him to be a light in a dark, sinister world. Why Tebow, why now? Because people are desperate for hope in a time where hopelessness runs rampant. Why Tebow, why now? Because, whether you believe it or not, his public expressions of faith is a public expression of God’s love for us – His blessings towards us are never kept quiet, are they? Why should our expressions for God be toned down? It’s through a passion for God and compassion for others that people are won to Christ. This tried and true method works.

Finally, we should never, ever put Tebow, the man, on a pedestal — one slip up can bring all of the world’s glory and adoration for him down faster than a Kardashian marriage. What we can elevate, however, is God’s desire for His love, works, and compassion for people to be exemplified through this Southern boy’s love for good old fashion football.