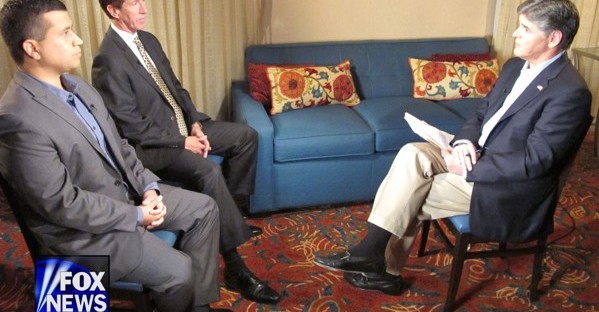 Yesterday, George Zimmerman, the accused killer of Treyvon Martin, spoke exclusively to Sean Hannity about the series of events that surrounded the murder of the teenager.

I didn’t see the entire interview, but upon waking up this morning, everyone was talking about this statement Zimmerman made about that night being a part of “God’s plan.” I, like many people, stared at my computer screen trying to understand how he could make such a statement with a straight face.

Let’s make one thing clear: I am not here to get into a theological debate about God’s will, free will, or any other topic that many who don’t believe in God try to argue to discredit Him. As I always say: if I’m wrong, I’ll die, turn back into dust and that’ll be it. Nothing to it. If you’re wrong, well… let’s just say it’s not a risk I’m willing to take.

What I will do is give Georgie a Sunday School lesson. Some basic bible principles that he may have missed while sleeping in church.

Georgie: “Ah fooey, lady. Wake me up when we get to the good part.”

“I feel that it was all God’s plan, and for me to second guess it or judge it,” he said, trailing off.

Asked, “Is there anything you might do differently?” Zimmerman said, “No, sir.”
[taken from ABCNews.com]

Here’s the issue, Georgie. You can’t say that killing Trayvon Martin was divine providence when your actions went against one of the core teachings of Christianity. In Exodus 20 verse 13, we were given the sixth commandment which states: thou shalt not murder.

God ain’t confused. He meant what He said on top of Mount Sinai. You can’t murder someone and say, “Oh, the Lawd made me do it!”

We test the spirit by the spirit (1 John 4:1) and those things God has providentially called us to do is in line with His spirit.

Dear friends, do not believe everyone who claims to speak by the Spirit. You must test them to see if the spirit they have comes from God. For there are many false prophets in the world.

The greatest issue I have with your public display of ignorance about the God you reference is that you have done a disservice to the Christian faith by validating your actions based on this version of a God who gives us the free will to murder as we see fit.

Too often people claim to be Christians but have no idea what it truly means to follow Christ. Had you paid a little more attention in Sunday School, you would have known that John 10:10 clearly tells us that it is Satan that comes to KILL, STEAL, and DESTROY, not God. Jesus came to give us life and to have it to the full.

You should know, Georgie, that 2 Peter 2:2 says that “many shall follow false teachers (which is what you became when you brought God into the picture for your defense on national TV) and their destructive ways. And because of these teachers, the way of truth will be slandered.”

If for one second you think that killing someone was a part of “God’s greater plan”, you have been fooled.

You stated that you “wished that there was something — anything I could have done — that wouldn’t have put me in the position where I had to take his life,” alluding to the same idea that your encounter with Trayvon was fate, divine, and all a part of God’s plan… to do what, exactly?

Listen, Georgie: God did not make you kill Trayvon. This was not a part of God’s plan for your life or Trayvon’s. The enemy has tricked you into thinking that this was the right thing to do and you fell for it.

Sadly, you’ve been hoodwinked and bamboozled into thinking that only bits and pieces of God’s word is true — forget the “reap what you sow” and the “weeping, moaning, and gnashing of teeth” stuff.  Swerve.

But you want a big ol’ piece of that forgiveness pie, right?

I’ll leave you with this last bible lesson, Georgie. Romans 12:17-21 is the most gracious and, in my opinion, most appropriate scripture to sum this entire experience up for you. It wasn’t a divine moment in time, George. Sorry. It was, however, a moment for you to use the Word of God in context and with discretion.

17 Never pay back evil with more evil. Do things in such a way that everyone can see you are honorable. 18 Do all that you can to live in peace with everyone. 19 Dear friends, never take revenge. Leave that to the righteous anger of God. For the Scriptures say,

“I will take revenge;
I will pay them back,”
says the Lord.

20 Instead, “If your enemies are hungry, feed them. If they are thirsty, give them something to drink. In doing this, you will heap burning coals of shame on their heads.”

Got it? Class dismissed.

Power of the Pivot

Pivoting allows you to see what’s around you, assess where the opportunities are, and act accordingly. Take the shot or get an assist. Either way, forward movement is the goal.