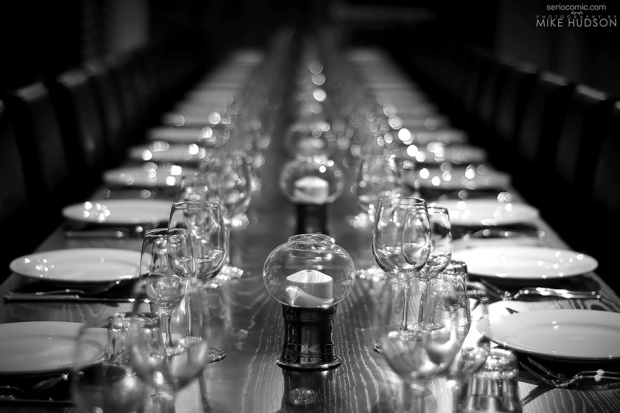 We all know the familiar scripture out of the 23rd Psalm where David writes about his dependent relationship on the shepherd of all shepherds, God. In verse five, David says that God “preparest a table before me…” and finishes his rumination about how good it is to be in the House of the Lord for ever and ever, amen.

During a drive through the city yesterday, God gently said to me, “Let me prepare a table for you.” In my mind, I had an idea of what this meant: let me be God and you move out the way; what I have is so much bigger than you could imagine! But, though I’d heard that scripture a million times, I didn’t know what having a table prepared before me really meant.

After digging in my Hebrew concordance, I found that the word “table” is defined as “a king’s table, for private or sacred use.”

When God prepares a table for us, it’s grand, filled with the best of the best, sparing no expense, concerned with no cost — much like the table of a king or queen! This is the ideal table that God would have us “feast” from every day of our lives: one that provides every need that we have in abundance that we may feed those around us! (See 1 Kings 4:27)

There’s some rules to sitting at this table, however. Because the table can also be reserved for private or sacred use, we have to have discretionary taste regarding who we invite to sit with us. The Queen of England doesn’t allow just anybody to sit at her table, especially someone who doesn’t have like taste and purpose! “Strange” guests (counterproductive people, ideas, or behaviors) that don’t respect the table, its preparer, or even who the table was prepared for can ruin the feast, contaminate the food, and destroy the sanctity of the moment.

Ever prepared a great meal for friends and family and someone ruins it by eating sloppily, snatching biscuits out the basket, or not saying, “Thank you” for your hard work? Ungrateful folks, aren’t they?

God wants us to take a seat before life’s table and enjoy the benefits of having a King for a father. This experience is readily available to anyone who is a part of God’s kingdom, but we contaminate the table when we invite “strangers” like strife, greed, sin, disobedience or a disregard for God to sit next to us as our “guest.” Psalms 69:22 calls the “table” being a “snare” or “trap” for those who oppose the Godly but I find that more often than not, we serve as our greatest opposition to having God’s best. Isaiah 28:8 also shows us where a table is considered “unclean” because of the behaviors of those table guests.

There’s much to be said about having what’s called “good table manners.”

How then do we receive and enjoy the splendor of sitting at a God-prepared table and not spoil it? Keep your eyes on the preparer and not what’s been prepared. We can’t get consumed with the grandeur of the table itself. Those things, no matter how great and opulent they are, pale in comparison to the glory and honor that should go to the preparer, Yahweh. When we take our eyes off the preparer, it gives room for those “strangers” to enter in. Remember that couple who snuck into the White House dinner party in 2009? No one likes a dinner party-crasher. Someone had their eyes focused on the pretty table before them and some strangers got through. We can’t be about that life! Keeping our eyes on Him lets Him know that we trust that whatever He puts on our plate, we are willing to eat.

On the “I hope my table has some good food on it” chase,